THE ENIGMATIC BLECHMANN BUILDS A CUSTOM R18 FOR BMW 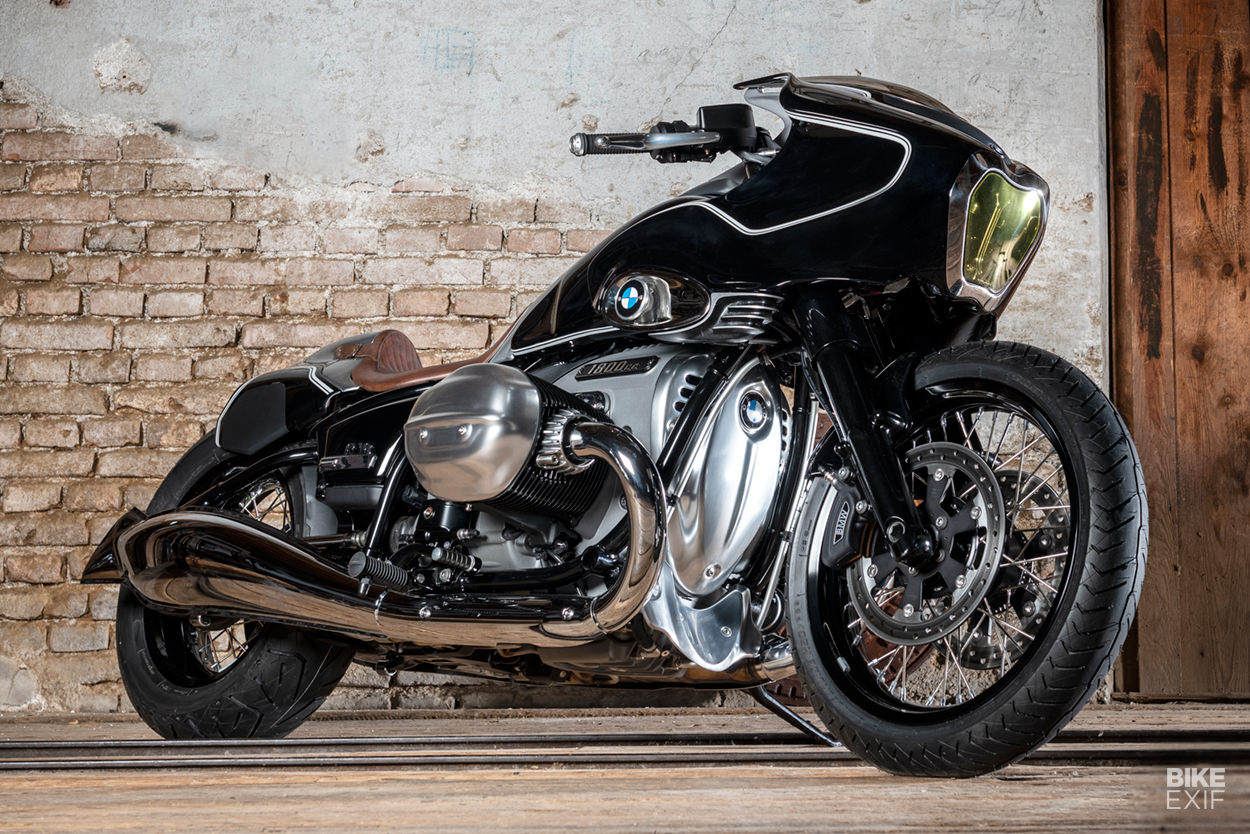 THE BMW R18 hasn’t officially hit the streets yet, but that hasn’t stopped BMW Motorrad from getting the hulking 1800 cc cruiser out to customizers. This latest R18 is the work of the reclusive Austrian craftsman Blechmann, and it’s the most offbeat example we’ve seen so far.Blechmann is the alias of Bernhard Naumann, who lives in the small village of Neustift, near the Austrian-Hungarian border. It loosely translates into ‘tin man,’ which is a nod to his forte: metal shaping. He’s collaborated on a number of builds that have featured on our pages, and he also built the eye-popping ‘Giggerl‘ BMW R nineT. 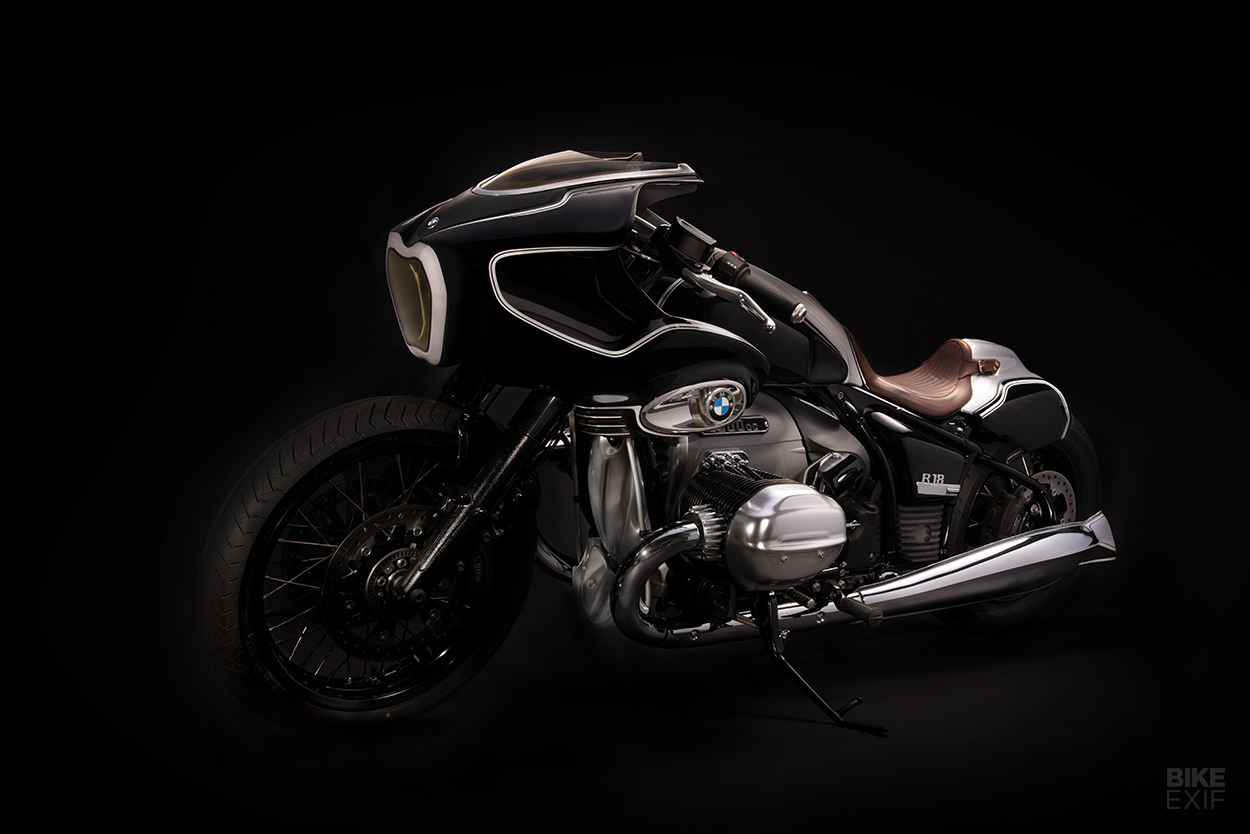 Blechmann’s a traditionalist, forgoing sketches and renders in favor of working directly on the motorcycle he’s customizing. For the R18 project, he followed his usual process: strip it, create cardboard mockups on the bike to work out the proportions, then shape the final pieces. “I call this ‘rapid-prototyping-Blechmann-style’,” he quips.Here, that process has resulted in a fully faired cruiser, that somehow looks both retro and otherworldly at the same time. 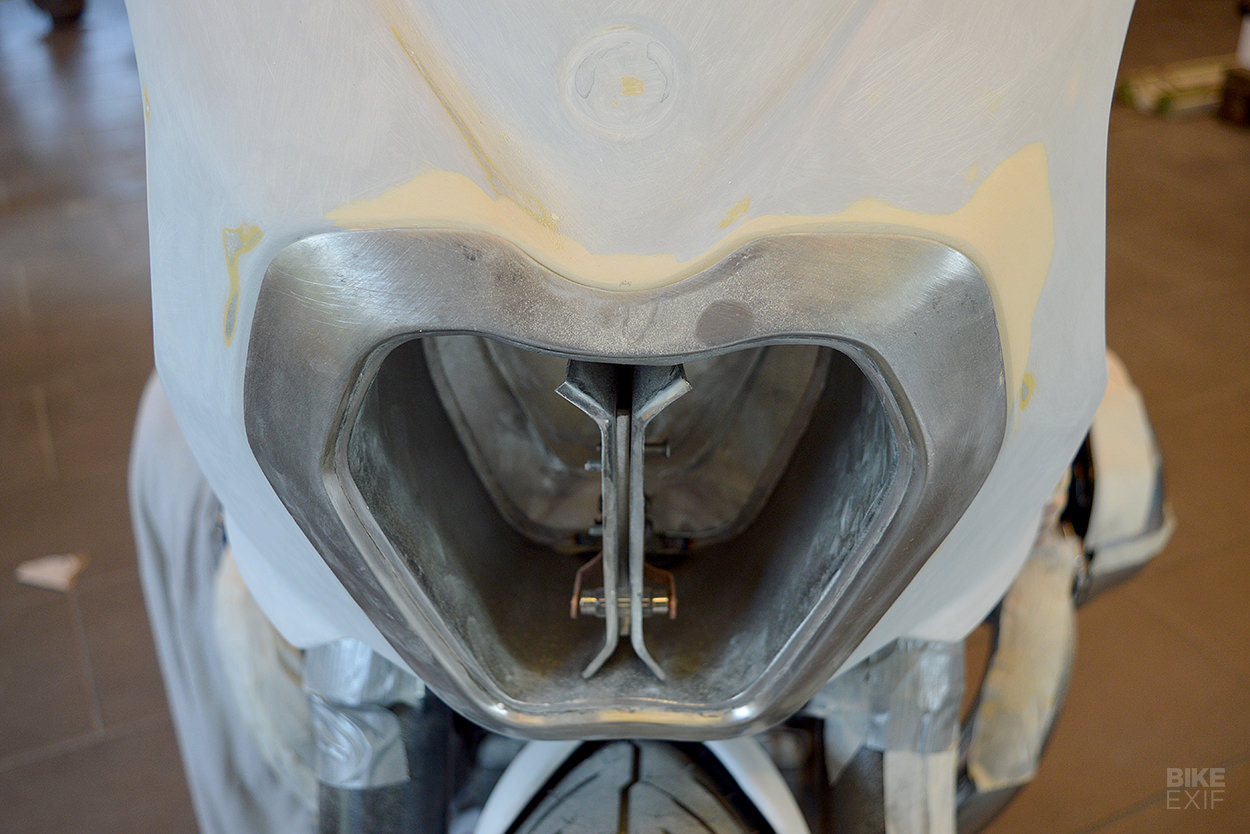 This eclectic style is par for the course for Blechmann: while growing up, his influences included everything from spaceships to nature, and some of his work is more akin to sculpture than traditional motorcycle design.“I never followed any trends or given rules,” he says, “and I was never happy with off-the-shelf things. I do not criticize the mainstream… I simply just never cared.” 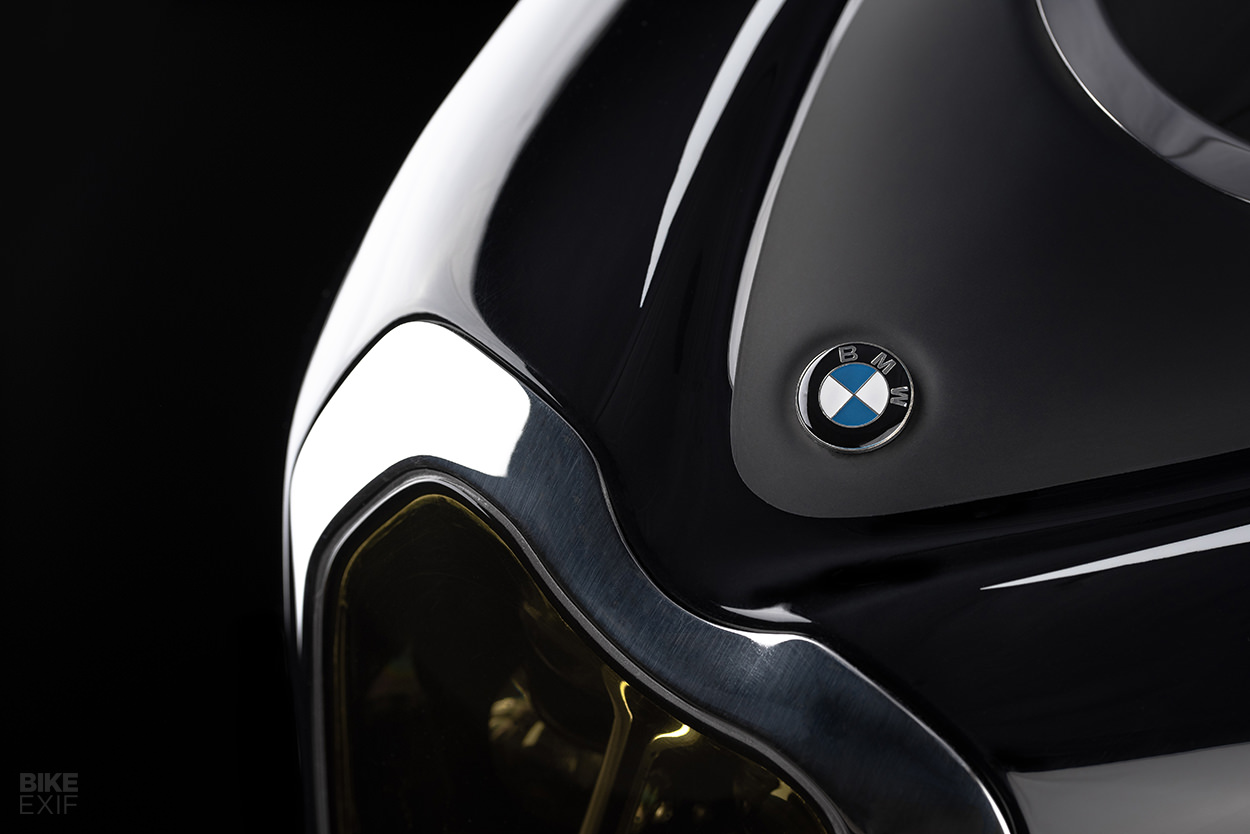 Working without altering the R18’s main frame or running gear, Blechmann has transformed it into a sort of neo-retro bagger (sans panniers). The design incorporates the OEM fuel tank, but it’s been narrowed, with a pair of knee indents hammered in. Running over the top of it is a new piece that interfaces with a custom fairing mount up front.The entire front end is wrapped in a heavily contoured, hand-shaped fairing. It’s laden with intricate details—like finned side sections, and repurposed tank roundels that are recessed into polished surrounds. (The front turn signals are incorporated here too). 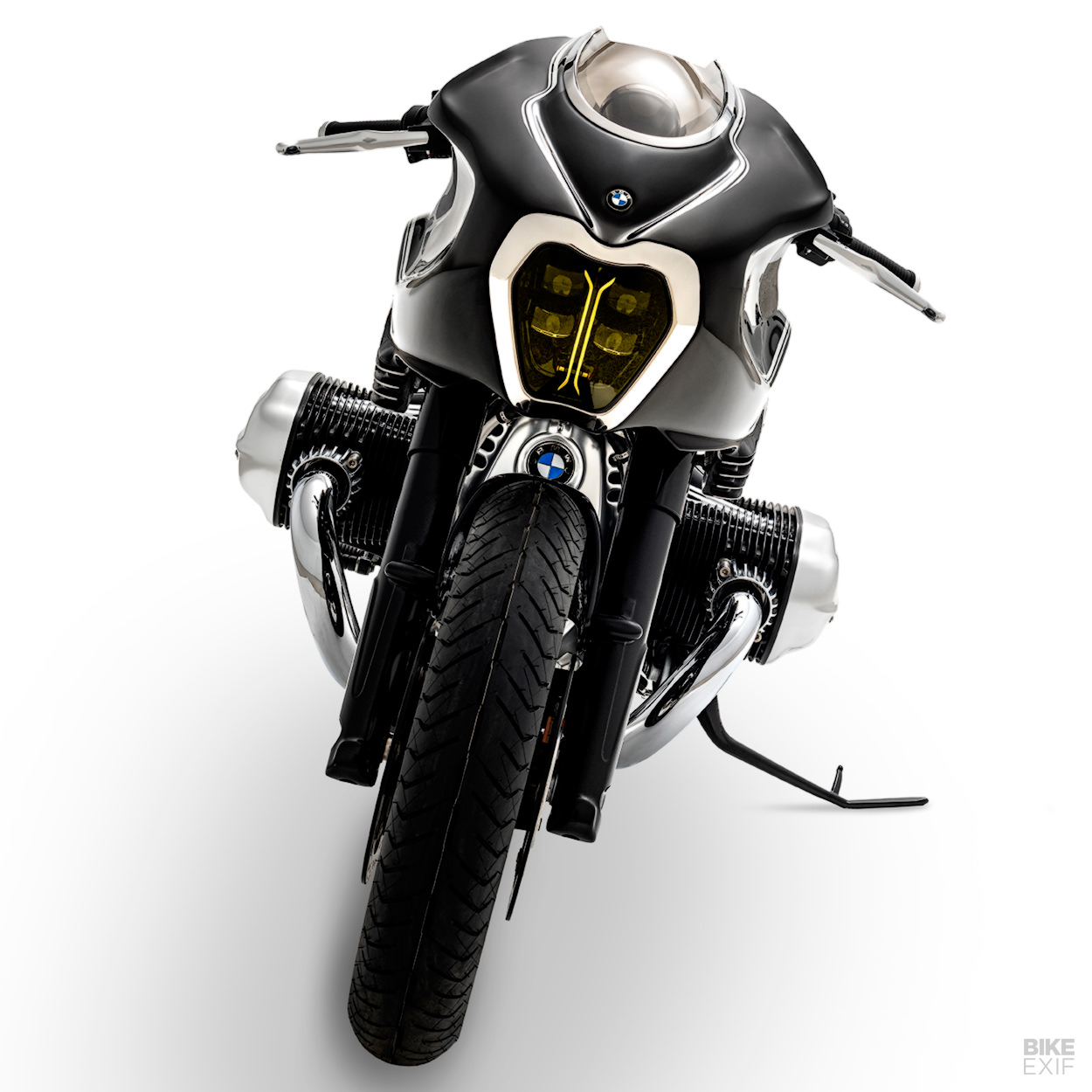 Up front is a recessed headlight arrangement that’s extremely unusual. Designed to mimic the ‘kidneys’ on classic BMW automobiles, it features LED internals, and a Plexiglas lens that Blechmann shaped in his oven.The hand-shaped tail section echoes the style of the front, with a tail hump attached via the BMW’s rear fender strut mounting points, and a deeply arched brown leather saddle with a neat little strap detail. 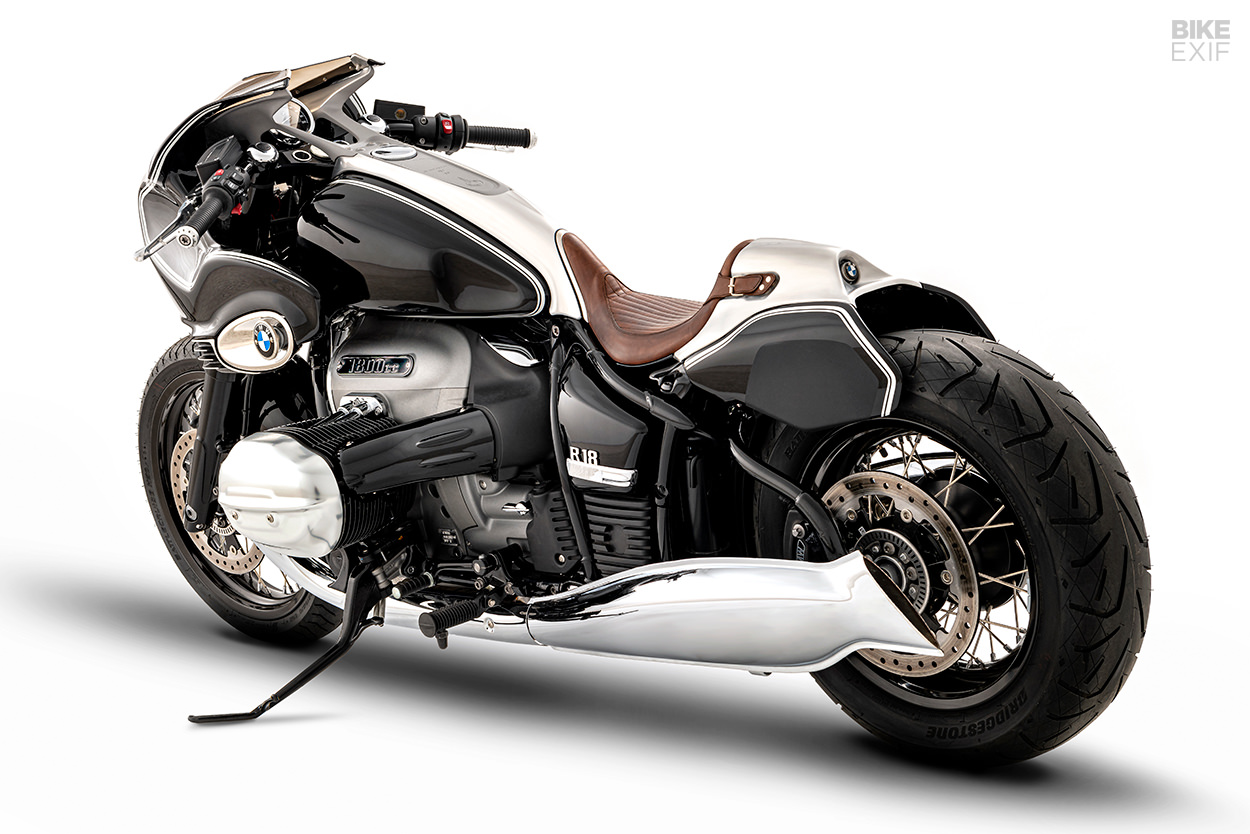 Other handcrafted touches include a tidy belly spoiler, and a barely-there front fender. The cockpit’s equipped with the stock speedo, while the custom clip-ons were actually cut from the original handlebars. A Kellermann LED recessed into the tail is one of the few off-the-shelf parts.This Blechmann special wears a livery straight out of BMW’s playbook: black, with double white pin striping. The effect is contrasted with sections of dull or polished metal, and capped off with tastefully placed BMW badges. 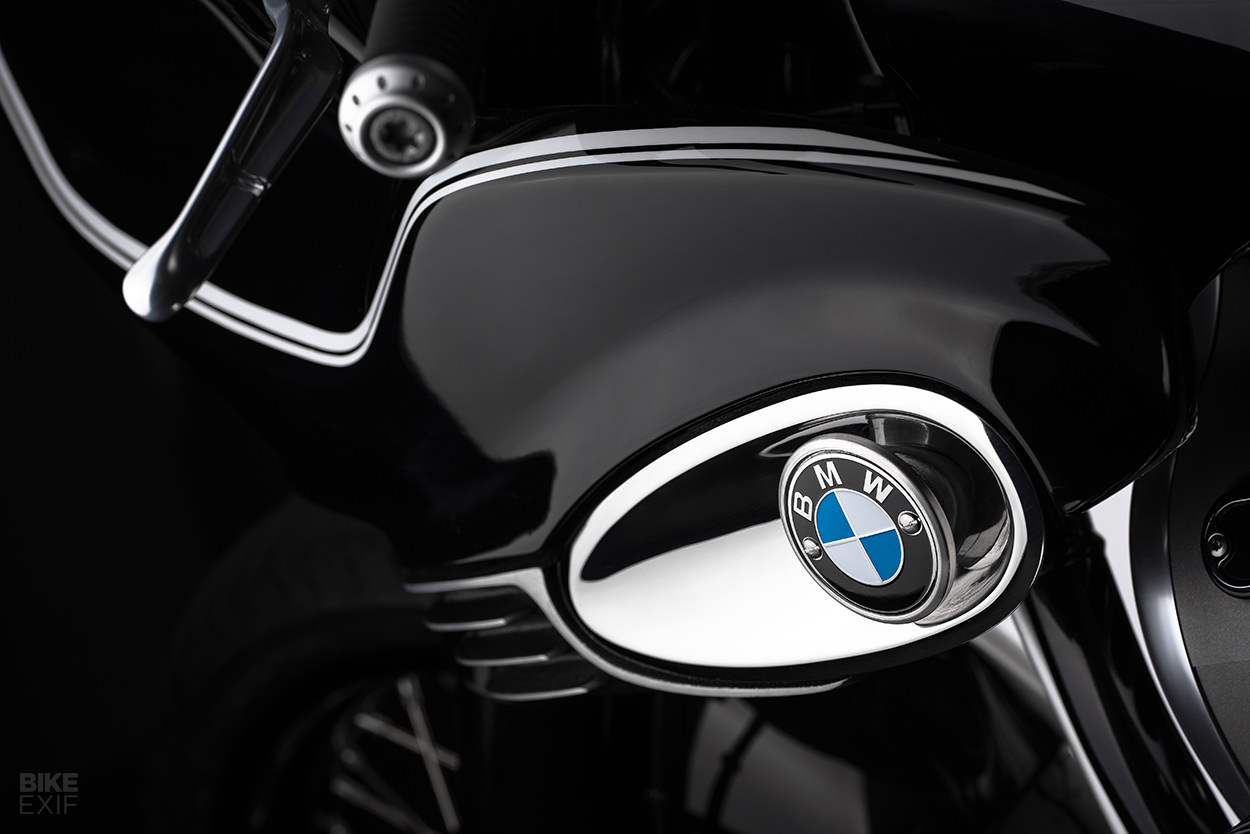 Redressing the R18 took Blechmann (and the carefully selected friends that occasionally help him with miscellaneous tasks) 450 hours to complete. But he’s left a lot of the original bike intact underneath the bodywork, to keep some of its original DNA. Even the ungainly fishtail exhausts are still in play… but that’s quite deliberate.“As the production R18 was revealed, some people were complaining about the exhaust,” he says. “But I liked it, and decided to integrate it into my own concept. So I mimicked the shape in my bodywork.” 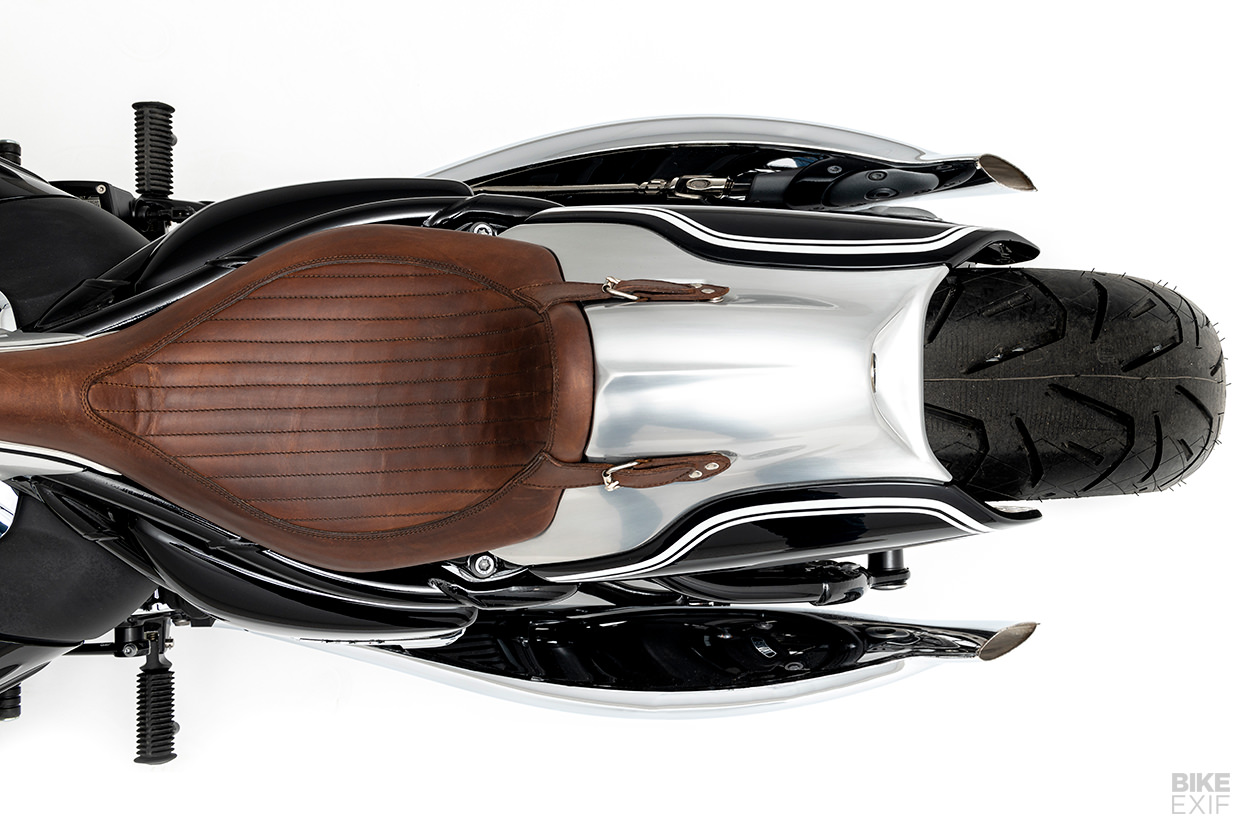 “And again, to show what’s possible with the original chassis. So a customer can comprehend what the bike looks like with different bodywork. To be more valuable for BMW in the end. And that was my approach from the beginning.”Blechmann’s R18 presents an intriguing prospect—a glimpse at what this boxer-powered behemoth could look like with a fairing. BMW have said since the beginning that multiple versions of the R18 are planned… could this hint at one possible future?